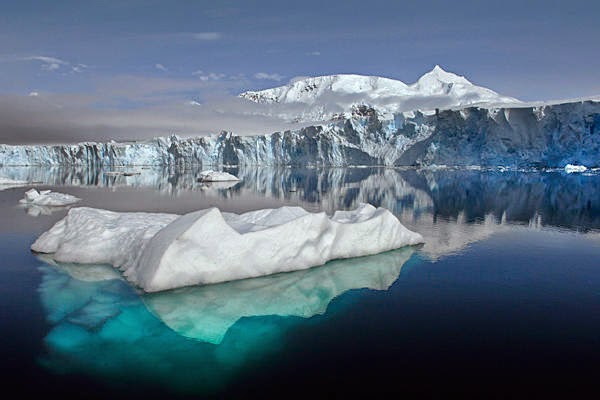 It’s all about fresh water. In this case, massive freshwater outflows from the vast glaciers covering Antarctica.

This week, a new scientific report published in the Journal Nature found that from 1992 through 2012 freshwater outflow from Antarctica’s massive glaciers exceeded 400 gigatons each year. An immense flood of cold, fresh water. One that helped push sea levels rapidly higher around the Antarctic continent.

But with glacial melt on the rise and with mountains of ice now inexorably sliding seaward, these freshwater flows may just be the start of even more powerful outbursts to come. And such prospective future events have far-ranging implications for sea level rise, global weather, sea ice, human-caused climate change, and world ocean health.

The researchers discovered the tell-tale signature of this vast freshwater flood through chemical analysis of the seas surrounding Antarctica. The analysis pointed to a broad and expanding fresh water layer over-riding a warmer, saltier current issuing in from the Southern Ocean.

Since fresh water is less dense than salt water, the freshwater layer expands at the ocean surface causing sea levels to rise more rapidly. Meanwhile, the heating of the deep ocean surrounding Antarctica is thought to result in additional thermal expansion of the water column.

The study comes on the back of other recent findings showing that warm water invasion at Antarctic glacier bases had led to more rapid than expected melt and destabilization. In May, two NASA studies showed that a broad section of West Antarctica had destabilized and was sliding at an ever more rapid pace toward the ocean (see reports here and here). These findings held stark implications for global sea level rise as large ice regions of Greenland and West Antarctica, containing enough water to raise seas at least 15 feet, are likely already in a state of irreversible collapse.

This intensifying glacial melt and associated freshwater cap expanding out from the pole has implications — not just for sea level rise, but for sea ice, weather, and world ocean system health.

Large outflows of glacial fresh water may well be involved in the recent observed expansion of sea ice in the zone surrounding Antarctica (see recent related study). Fresh water serves as an insulative cap on the ocean surface preventing warm water from entering the top layer from below. The warm, salty water, in the Antarctic instead pools near the bottom or at the base of the great ice sheets.

Fresh water also freezes at a higher temperature than salt water. So sea ice in an expanding freshwater zone around Antarctica would have naturally higher resiliency even to the rising temperatures now occurring due to human-caused warming. Eventually, however, human heat forcing would overwhelm the ice, but not before a period of related, localized negative feedbacks.

For global weather, such events have major implications. Regional cooling in the zone of freshwater outflow would juxtapose regional warming in the southern hemisphere meridional zones. This temperature differential would increase with the strength of the fresh water outflow and the rising intensity of the human-driven warming. The result would be a powerfully intensified storm track. Both the intensified storm track and increased atmospheric moisture loading due to human warming would result in much more powerful weather events than we are currently used to and the potential for catastrophic storms would drastically increase.

One of the main red herrings used by the AGW denier crowd now is that Antarctica ice is increasing which means global warming is a hoax. It is a glaring example not only of their political predisposition to misinform but also their total lack of understanding of science and how the Earth works. The current condition of planet Earth is dire. Our continued preoccupation with political back and forth to defend the greed, arrogance, ignorance and hubris of humanity is suicide. It is no small task that we must now undertake to secure even a few years of human survival beyond this century if that.

Hope is a light that is fading though still glimmering. However, as a species we continue to squander every chance we get to prove we are above ego, pettiness and selfishness. The water of our world is now over-fished, over polluted, radiated, toxic and in many places unfit for human consumption or consumption by other species. The continued use of fossil fuels only makes the challenge all the more harder to overcome.

This is about a collective shift in consciousness. However, is that possible now? Even with the dire news that continues to be made known about the effects of our consumption the globe as a whole sits and waits... and denies. The message Mother Earth is sending us is one of urgency. She is warning us of the calamity unfolding before our eyes as we continue to wear blinders.

We can no longer afford to answer the warnings with business as usual measures. Doing the same things expecting a different result is indeed insanity. It is also the stubbornness of humanity in thinking we are not the problem. Desperate times call for drastic measures. This is not the time for one day marches with glitter signs that seek no specific and necessary demands. This is not the time for the same "leaders" who exacerbated this crisis to control the "solutions." People need to rise up in great numbers and be willing to take this to the source of the crisis. Us and our drug dealers.

There have also been reports that "Peak Oil" is not as peak as was once thought. This would then mean if true that the predisposition of humans to be lazy, visionless and slaves to comfort and convenience will certainly be the end of us. The continued fracking of our water, the burning of fossil fuels, destructive agriculture and the continued warmongering of those who are being charged with caring about our environment dictate unequivocally that a new political and economic model is essential to our continued survival on this planet. However, without that shift in us there is no model that can be sustained.

As the Arctic and Greenland continue its melt march and Antarctica continues to exemplify the effects of human ignorance and arrogance we see humanity on a collision course with itself. These events are not just about the physical limitations of our Earth but the moral limitations of the human spirit taking hold. It will surely be a sad epitaph if we continue to ignore these warnings simply because we are too proud to look in the mirror.

This is what I will doing on September 21st as thousands continue to support the fossil fuel agenda by flying and busing to a march in NYC that is little more than a street fair in the fight for this planet. This also does not have to be just one day. It isn't for me. Make a pledge to yourself as well as a sentient human being who cares about this world and those species that live on it to make this something you do more than one day. It can be done. It must be done. We must transcend politics. We must be responsible and those who continue to destroy the ecosystems of our world must finally truly be held accountable.

Collapse Of Parts of West Antarctica Ice Sheet Has Begun