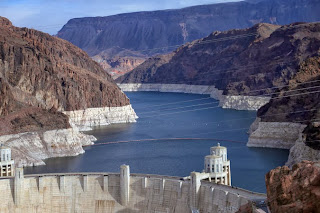 LAKE MEAD, Nev. — The sinuous Colorado River and its slew of man-made reservoirs from the Rockies to southern Arizona are being sapped by 14 years of drought nearly unrivaled in 1,250 years.

The once broad and blue river has in many places dwindled to a murky brown trickle. Reservoirs have shrunk to less than half their capacities, the canyon walls around them ringed with white mineral deposits where water once lapped. Seeking to stretch their allotments of the river, regional water agencies are recycling sewage effluent, offering rebates to tear up grass lawns and subsidizing less thirsty appliances from dishwashers to shower heads.

But many experts believe the current drought is only the harbinger of a new, drier era in which the Colorado’s flow will be substantially and permanently diminished.

Faced with the shortage, federal authorities this year will for the first time decrease the amount of water that flows into Lake Mead, the nation’s largest reservoir, from Lake Powell 180 miles upstream. That will reduce even more the level of Lake Mead, a crucial source of water for cities from Las Vegas to Los Angeles and for millions of acres of farmland.

A connector will link the existing water infrastructure to a tunnel being built under Lake Mead. Jim Wilson/The New York Times Reclamation officials say there is a 50-50 chance that by 2015, Lake Mead’s water will be rationed to states downstream. That, too, has never happened before.

“If Lake Mead goes below elevation 1,000” — 1,000 feet above sea level — “we lose any capacity to pump water to serve the municipal needs of seven in 10 people in the state of Nevada,” said John Entsminger, the senior deputy general manager of the Southern Nevada Water Authority.

Since 2008, Mr. Entsminger’s agency has been drilling an $817 million tunnel under Lake Mead — a third attempt to capture more water as two higher tunnels have become threatened by the lake’s falling level. In September, faced with the prospect that one of the tunnels could run dry before the third one was completed, the authority took emergency measures: still another tunnel, this one to stretch the life of the most threatened intake until construction of the third one is finished.

These new realities are forcing a profound reassessment of how the 1,450-mile Colorado, the Southwest’s only major river, can continue to slake the thirst of one of the nation’s fastest-growing regions. Agriculture, from California’s Imperial Valley to Wyoming’s cattle herds, soaks up about three-quarters of its water, and produces 15 percent of the nation’s food. But 40 million people also depend on the river and its tributaries, and their numbers are rising rapidly.

“The era of big water transfers is either over, or it’s rapidly coming to an end,” said Mr. Entsminger, the southern Nevada water official. “It sure looks like in the 21st century, we’re all going to have to use less water.”

Graphic Of The Day

You think? Conservation however, appears to be a dirty word to those who think they are entitled to use any amount of water they chose for their pools, golfing, mansions, casinos and high living as well as fracking and water use by industry that is unaccounted for. Were it not for the fact that the river and the ecosystems that support it have been damaged so greatly, I would say it was justice. Extreme suffering seems to be the only way selfish people ever learn. 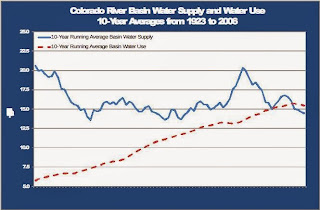